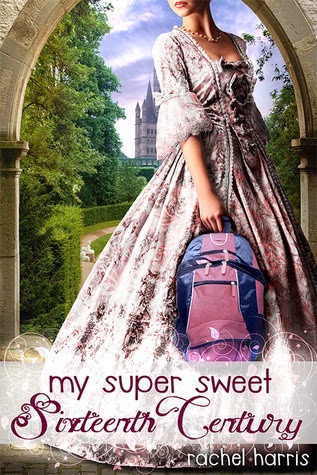 (From Goodreads) On the precipice of her sixteenth birthday, the last thing lone wolf Cat Crawford wants is an extravagant gala thrown by her bubbly stepmother and well-meaning father. So even though Cat knows the family’s trip to Florence, Italy, is a peace offering, she embraces the magical city and all it offers. But when her curiosity leads her to an unusual gypsy tent, she exits . . . right into Renaissance Firenze.

Thrust into the sixteenth century armed with only a backpack full of contraband future items, Cat joins up with her ancestors, the sweet Alessandra and protective Cipriano, and soon falls for the gorgeous aspiring artist Lorenzo. But when the much-older Niccolo starts sniffing around, Cat realizes that an unwanted birthday party is nothing compared to an unwanted suitor full of creeptastic amore. Can she find her way back to modern times before her Italian adventure turns into an Italian forever?

With all the new adult and adult books I've been reading lately, I really was jonesing for something lighter and less serious. Awhile ago, I borrowed My Super Sweet Sixteenth Century from my super good friend Anna from Annaberry Reads, and when I saw it on my shelf, I knew that this was the book to break things up for me. I was SO right. My Super Sweet Sixteenth Century was light and funny, silly at times, and not heavy-laden with tons of deep issues and drama.

Cat is a Hollywood baby, being the only child of two famous parents. Her self-centered mother left her and her dad years ago, and now Cat's dad is preparing to re-marry. His fiance and Cat have never clicked, so this trip to Cat's dream city, Florence, for her 16th birthday party, is sort of a last-ditch effort to bond. Cat, however, has no desire for togetherness with the soon-to-be-step-monster. While out wandering around on her own, she steps into a gypsy tent, and steps out in the 16th century. Cat soon meets up with her long-since dead relatives and falls in love with an Italian artist. It's fun while it lasts, but soon, Cat really wants to get home, but she's not sure how to get there.

I think one of my favorite parts of My Super Sweet Sixteenth Century is that Cat's problems are very real ones for a kid her age. Her parents are divorced, and it's just been she and her dad for years. Now, he's looking to remarry, and Cat isn't happy about it. She acts like a teenager about it, too. She gives her dad's fiance attitude and a hard time for no good reason. She dreams of blowing them off to explore Italy on her own. The thoughts that run through her head and the words that come out of her mouth are exactly like I think should come from a 15-year-old. In so many books, teens don't sound or act like teens. Happily, that is not the case here.

The glimpse into medieval Florence was fun. Harris obviously did her homework. Everything from the wardrobe to the setting to the customs of the time seemed accurate and interesting.

Lorenzo was positively dreamy. He was appropriately chivalrous and swoony and romantic with Cat. He's an artist, so he's not as buttoned up as most men of the time. Reading about how his feelings about Cat grew and changed was so sweet and romantic. I loved the chemistry between these two so much.

My main problems with My Super Sweet Sixteenth Century surrounded the mechanics of how Cat was sent back in time. I thought the description on how it happened very convoluted and vague. If you're going to send a character back in time, obviously, some fantastical magic will come into play. But, it would be best if the magic was believable and explainable. It seemed a little to loosey goosey in this case for me. Also, I have a hard time believing that Cat's cousin would believe her story so readily.

Although I understand why Cat couldn't stick around in the 16th century, it was still seriously sucktastic when she left Lorenzo behind. Of course, we always want our couples to have HEAs, and in this case, unless Cat stays there or Lorenzo goes with her, that wasn't going to happen. As a true romantic, that seriously bummed me out. I did appreciate the twist at the end to try and smooth that over, though.

If you're tired of all the post-apocalyptic YA or angsty NA or complicated adult books you've been reading lately, take a break and check out My Super Sweet Sixteenth Century. It's a really quick, light read that will save you from the doldrums of what you're used to.