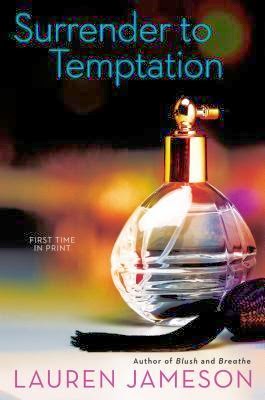 (From Goodreads) After walking in on her boyfriend with another woman, Devon Reid decides to seek solace in the small California town she’s often visited on vacation. Instead, she finds herself consumed by a mysterious man who sets her ablaze with one simple look.

Devon has always been the good girl, but Zach’s touch turns her into something primal, especially when he persuades her to give up control to him. But while Zach can make her burn, he seduces Devon one moment and turns her away the next.

When Devon starts her new job at Phyrefly Aviation, she learns that Zach is actually founder and CEO of the massive corporation. And while Devon knows she should keep things between them strictly professional, his overwhelming magnetism makes it impossible to stay away....

There was a lot to like in Surrender to Temptation - mystery, secrets, passion. There were also some elements that frustrated me beyond reason.

If there's one thing I hate, it's when the female MC in a story is a glutton for punishment. Devon seemed to GORGE herself on punishment like she would a pint of Chunky Monkey. She had a lot of doormat-ish qualities that made me want to shake her. After catching her boyfriend cheating on her, she leaves him a note (are you KIDDING ME?) telling him she's leaving him, and takes off for her favorite place in upstate CA. Leaving was the bravest thing she did in this book.

While in the beach town, she meets an enigmatic stranger who gets her heart racing. After spilling her guts to him, he offers her a job at his company in San Fransisco. She accepts the job and Zack accepts that she interests him more than she should. Thus sets off a relationship of extreme highs and lows, perpetrated by Zack's hot and cold demeanor.

I love the bookish guys that you have a hard time figuring out - the ones that seem to love you one minute and merely tolerate you the next. Their secrets and motivations are always so compelling, and the person in me who likes fixing people loves watching the love between the guy and the girl who captures his heart unfold. One of the other aspects of those types of stories that I love are the girls who don't put up with their crap.

Sadly, Devon was not one of those girls. She and Zack would have an amazing time together (which always included amazing sex, of course), he would then brush her off, she would go home and cry for a few days, and then when he contacted her again, she very willingly and readily went back to him. Over and over and over again, this is what happened. Just once, I wanted Devon to tell him NO. It made me more than a little crazy.

Although I had problems with Devon's lack of ability to stand up for herself in regards to Zack, I did enjoy watching her break down his walls, nonetheless. The HEA at the end was really nice too. I'm glad I read this book, and am also glad I got to read all the parts to the story at the same time. The endings of some of them would've killed me if I would've had to wait!